People have been walking in the Lake District Fells since time immemorial. Certainly since the Stone Age: some of the ways of our ancient ancestors are still mountain paths today. The Langdale Pikes were the centre of production for fine stone axes. For over a thousand years, right up at the highest summits, the rock was burnt, hewn and cleft from the crags.

Ascending the ridge up from the NT car park at Stickle Barn to Thorn Crag there are still signs of waste chippings dropping down the ravine to the head of the Ghyll. Then on up to Pike of Stickle where most of the activity took place, hidden below the face of the Pike is a steep scree slope, overlooking the valley far below- a very atmospheric place in the wind and mist. Here the intrepid can descend to see a small cave- hewn by hand by antler picks. It is thought that the best stones were gather and shaped into rough-outs before being taken elsewhere for polishing. Over the back is an expanse of peaty moor where mounds of chippings have been found- exposed by the infamous Cumbria wind and rain. The rough-outs would then be transported down via Stakes Pass to valleys to the north, or back down to Langdale, or even west via Angle Tarn and Windy Gap between Great and Green Gable down to Ennerdale and the coast.

A great day’s hike is completed by following their footsteps- up to Pikes, finding the cave and then heading back via Stakes Pass and, if time permits, diverting over Rosset Crag at the head of the Langdale Valley to dip our toes into the famous Angle Tarn before descending via Rossett Gill to the valley.

Check my available dates for this trip

Book a date for your trip
Guided by
Bill Mumford 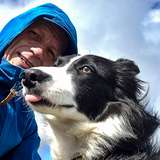