It was 1985, and the two alpinists were there to climb its difficult and dangerous West Face. Theirs was an enormous and ambitious project, so much so that, although attempted several times previously, it had remained unclimbed. The climbers were armed with the strength and boldness of youth (Joe was 25 at the time, Simon was 21), which combined with the experience they had gained on large mountain faces in the Alps. In addition, they were influenced by that particular style of climbing that made the British mountaineers of that era approach the mountains without compromises. It is no coincidence therefore that they embarked on this adventure on their own. And it was only due to a chance encounter that Richard Hawking, a youngster just like them but with no mountaineering experience to speak of, accompanied them to Base Camp. 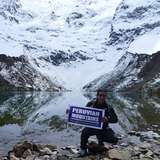