If you’ve ever wondered with what makes the Brecon Beacons so special... it all started millions of years ago and thousands of miles away.

This day is based around a little known area of the Beacons called Penwyllt and the Ogof Ffynnon Ddu Nature Reserve. Starting from the former quarrying hamlet at Penwyllt, we’ll follow man’s footsteps through different ages, from the Bronze age, right through the middle ages and in to the more modern industrial age, looking at the impact each stage has had on the landscape around us. We will climb to the peak of Fan Gyhirych to take in the breathtaking scenery; then our journey will take us in to the Ogof Ffynnon Ddu Nature Reserve which has some rare and beautiful features that contributed to the birth of the Fforest Fawr Geo Park, a World Heritage site within the National Park. Ogof Ffynnon Ddu was also the first area in the UK to be awarded SSSI (Site of Special Sceintific Interest) protected status both above and below ground in its sprawling network of caves. Our walk will bring us back to the hamlet of Penwyllt where we will explore the remnants of more recent history.
Guided by
Cari Evans 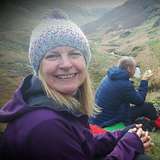